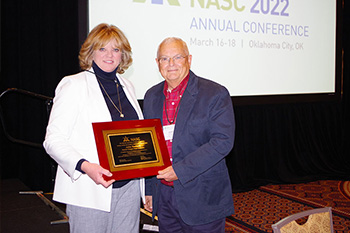 On Wednesday, March 16, John Radford, former state controller of Oregon, was named as a recipient of the National Association of State Comptrollers’ Louis L. Goldstein Leadership Award. This is NASC’s highest honor. The award was presented by President Lynne Bajema, state comptroller of Oklahoma, at the 2022 NASC Annual Conference, which was held in Oklahoma City, Oklahoma.

Radford has many years of governmental financial management experience starting his career working for the city of Omaha, Nebraska, in various financial management positions. In 1983 he moved to Oregon and began work as chief budget officer in the Oregon Judicial Department and was promoted to management services director in 1985. In 1989, the governor appointed John to the position of state controller where he served in that capacity retiring in November of 2011. He served as a member of the Oregon Statewide Audit Committee and on the Audit Committees of the Oregon Department of Education and the Oregon State Treasurer’s Office. In 2005 and at the request of the governor, John served as temporary CFO of the Oregon Public Employees Retirement System during a transition to a new PERS business and leadership model.

The Louis L. Goldstein Leadership Award is named after Louis L. Goldstein, former comptroller of Maryland and legend among government finance officials. It is presented to recognize extraordinary excellence and leadership in state financial management and service to the association. View all past winners.