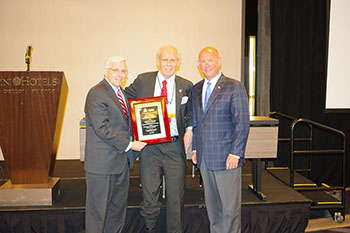 On Thursday, June 9, Justin P. Wilson, comptroller emeritus in Tennessee, was named as a recipient of the National State Auditors Association's William R. Snodgrass Distinguished Leadership Award. This is NSAA's highest honor. The award was presented by President Greg Griffin, state auditor of Georia, at the 2022 NSAA Annual Conference, which was held in Atlanta, Georgia.

Justin P. Wilson serves as comptroller emeritus within the Office of the Tennessee Comptroller of the Treasury. He previously served six terms as Tennessee’s 34th comptroller from January 15, 2009 until January 13, 2021.

Wilson has a long history of public service. He served as commissioner of the Tennessee Department of Environment and Conservation and as deputy to the governor for policy under former Governor Don Sundquist. He was a member of the Financial Advisory Board of the U.S. Environmental Protection Agency, and he served as chairman of the Nashville Electric Board, the Davidson County Metropolitan Health Board, and the Community Health Agency of Nashville and Davidson County. He was foreman of the Davidson County Grand Jury, and he has served in leadership positions for numerous Nashville business as well as civic and charitable organizations.

Wilson was also a partner in the law firm of Waller Lansden Dortch & Davis where he served on its Executive Committee. He is a graduate of Stanford University, Vanderbilt University School of Law, and New York University.

Wilson was named Conservationist of the Year in 1997, and the Justin P. Wilson Cumberland Trail State Park is named in recognition of his “conservation and environmental contributions to the State of Tennessee.”